It’s the usual story.   A guy from small town Missouri (out between St. Louis and Kansas City) learns BBQ from a young age at his dad’s knee.  Cooking up a whole lot of pork and Angus beef produced on farms our extended family still own.    Probably not much different than how an Italian kid or a Chinese kid learns their native cuisines.

He moves around the South as an adult, cooking barbecue and Mexican professionally in Houston, Tx.   Meets lovely Australian woman and they live together in Memphis, Tennessee for a decade, where they do a lot more BBQ.  They travel the world, learning about different sorts of food and studying a variety of cooking styles.   Meets baby daughter in Moscow, Russia and they all end up all living back in Melbourne as Australian citizens (Aussie, Aussie, Aussie!) and making some pretty darn good BBQ supplies.

Now, I’m the Bull Dozer.   That’s the guy on the labels that’s asleep next to the smoker, probably missing the next scheduled spritz. 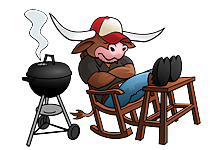 But if you want to know more…

TheN CAME THE Company

The first company, Ranch Hand, just came about out of missing ribs!  (and Mexican food).

This was in early 2010.   There were no US BBQ shows on Australian TV, no competitions or ABA or offset smokers being sold at the supply stores.   We went out and found all the stuff I needed to mix up some rubs and jar up some salsa because I was a bit homesick for all that stuff.  But family and friends loved it too when we had them over or visited from the US and suggested I should try selling some.  (pretty much the same way every little food company starts)

So my daughter and I start setting up at the local farmer’s markets.   We got a lot of puzzled looks the first few years!  (“Yes, of course you can put it on your roast too!”)  It gave us a chance to make some converts and some great food friends.   We also built some amazing contacts with the local growers, for everything from tomatoes to garlic to honey.

Almost a decade later, Ranch Hand has grown a bit and so have we.  We’ve got tons of ideas based on ingredients and techniques we’ve learned from places we’ve cooked in as diverse as Morocco to Vietnam to the back of Bourke and the creative bug just won’t stop.

Australia has changed too.    Food TV introduced BBQ to the whole country.   Suddenly there were festivals and competitions and restaurants and imported products everywhere and no shortage of relative newcomers/subject matter gurus.  Clearly, Australians had fallen in love with American low ‘n’ slow.  We decided it was time to really put that 50 years of training and experience to work.

We started Bulldozer in late 2019 with the intention to go all out.   To focus on trying to be the best rub company.  (and not just in Australia).

We’re not basing that on competition wins.  That feels too limiting. Competition barbecue, while fun and really impressive, is a very narrow style.  (so that it can be fairly judged)    Instead, we based “best” on the quality of the product, which applies to competition but also gourmet and high end home-style cooking.

One of the first things we did was to set aside the over-use of the word “authentic”.   Doesn’t really mean anything… everyone has a family recipe and a secret ingredient back home anyway.    (And I was born authentic. :D)     If our stuff was going to be really that good, like constructing anything, it was going to be based on the strength of the materials going into it and the knowledge of the people building it.

In short, we decided Bulldozer wasn’t going to be about “telling our story” (except here, I guess), it was about helping passionate lown ‘n’ slow cooks meet their goals.  Namely, to help them up their game, impress their mates with something they’ve never had before and to put a smile on the entire family’s faces over a fantastic meal experience.  So everyone can really “Smash Your BBQ!”

Most importantly, thanks for having a look.   Happy smoking and grilling!

Filmed at Mokoia Park in the beautiful Yarra Valley.  Thanks to our family for use of the venue, equipment  and helping hands

We Believe in Quality

Because We’re  Customers Too

what’s in it for you…

Our products are things you’ll feel confident giving the whole crew.  The  meat rubs are mild with bags of flavour, but customisable with a free chilli packet inside some varieties (the ones we feel can benefit from it) called the Chilli Sidekick.   The products are gluten-free unless we’ve noted an ingredient (like beer) that has gluten.    We don’t mess with MSG or artificial vinegar, smoke and maple powders, preferring natural spices for tang or sweetness.    And we’re not loaded down with sugar… but if you’re a competitor, we can advise on how to add a bit to give the rub that extra one bite oomph.   Just ask.    We love the sport and sponsor some teams ourselves and are registered bbq judges.

Quality for us is about the craftsmanship that comes with experience… and that’s what we’re really selling.   And it’s about what’s special and unique about the ingredients; how fresh those ingredients are and understanding what the purpose of each ingredient is.   When you’ve done something for 50 years, you just know stuff like that.

I won’t put anything else on my chicken anymore